Jarreth and Jade's Here For You story

Our Here For You telephone service connects stroke survivors and carers to trained volunteers, to offer support following a stroke and to help combat feelings of isolation.

Shortly after his stroke in April 2020, Jarreth was matched with Jade, a stroke survivor from Essex. Jade volunteers for Here For You as part of the Lived Experience telephone support offer.

Read their stories below and find out how to sign up or volunteer for Here For You. 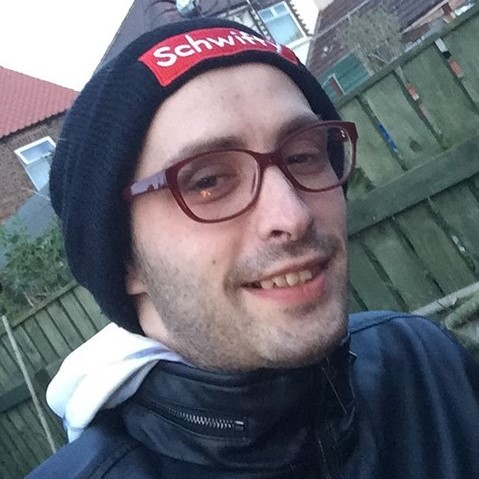 Jarreth was working full-time as a quality technician in a pet food factory, until he had a stroke in April 2020 at the age of 30.

Jarreth woke up to his alarm in the morning and found he couldn’t move his left side. His housemate called an ambulance. But when it arrived, the team advised they didn’t want to take him to hospital due to COVID-19 and told him he should make a doctor’s appointment.

He said: “By this point I was drifting in and out of consciousness. Fortunately, my housemate managed to get a wheelchair from a relative and took me to my doctors. The doctor called an ambulance crew and they took me straight to Hull Royal Infirmary.

“I lost the complete use of my left side,” he told us. ”But I’m slowly gaining back my movement. For the first two weeks, my speech was also badly affected, but it’s now improving.”

While recovering at home, Jarreth signed up to the Here for You service, which pairs stroke survivors with a volunteer who they can speak to regularly. Jarreth was paired with Jade, a stroke survivor from Essex. He added: “Personally I think it’s a brilliant service. I speak to Jade once a week and it’s helped me so much to talk to someone who has been through a stroke. It’s great getting advice from health professionals, but hearing real life experience from someone else who has been through is even better.

“It helps you feel you’re not the only one going through it. Especially during the pandemic when people like myself can’t get out and about, it really makes a difference. It’s definitely helped me to feel less isolated and more connected.

Jade was inspired to volunteer for Here for You after having a stroke in 2015, when she was just 21 years old.

“My stroke completely came out of nowhere,” Jade said. “The doctors seemed to have no idea what was wrong with me at first and I was completely out of it. When I woke up, I didn’t even recognize the new tattoo that I had just had done a week or so before.”

Jade had actually had a rare stroke that was caused by a clot in her sinuses and a bleed on her brain at the same time. Since leaving hospital, Jade has also been diagnosed with epilepsy and will always have to be on blood thinners.

Jade said: “Initially I felt like my whole life had been taken over by appointments. It’s also left with me bad anxiety, but thankfully this has now improved after therapy.”

While previously working at an estate agency, Jade has now started training to be a speech and language therapist, after seeing it at work during her rehabilitation. She sees this new ambition and volunteering for Here for You as two positive things to come from her stroke. She was matched with Jarreth, a stroke survivor from Driffield.

Jade said: “I have been volunteering for six weeks now and it’s amazing how quickly you bond with the people you speak to. It now feels like talking to a friend, and as two stroke survivors, I think we both get something out of it.

“I would recommend signing up to the Here for You service, or even volunteering. It’s for anyone anyone that’s going through a stroke, old or young. Everyone has different experiences of stroke and it’s important to share them. I would also recommend it to anyone that knows a loved one that’s had a stroke, it really does help to share."

You can access the Here For You service by filling in our online referral form.

If you know someone else who might benefit from Here For You, whether that’s a loved one or a patient, please fill out the following form.

If you are interested in volunteering for Here For You, you can read more about the role or apply below.

Appy to be a volunteeer