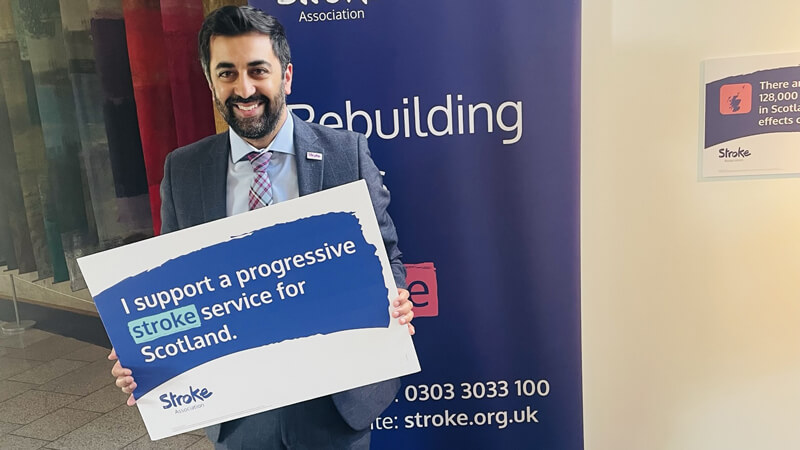 In May 2022, we were pleased to be back inside the Scottish Parliament for the first time since Covid-19 to host an exhibition stall in the Members’ Lobby.

We were there to provide MSPs with a short briefing about our work in Scotland. This included informing them of the ongoing stroke improvement work being undertaken by the Scottish Government, with a specific focus on the Progressive Stroke Pathway that was published in March.

We also spoke to them about the research that we fund, coalitions we are a member of and the many different ways they can get involved in our work.

This was my first proper ‘public affairs’ event since coming into this post last September. I was also there to introduce myself to the returning MSPs as well as to the new intake from last year's election.

Despite now being elected for a whole year, many of the new intakes were meeting each other - and organisations like ourselves - for the first time. It was great to see the lobby so busy with MSPs, journalists and a host of different groups on the parliament tour.

One of the most striking things that I took away after the three-day exhibition was how many people in Holyrood have a personal connection to stroke. Whether it be the elected members, the journalists pacing the lobby waiting for their next story, or the parliament staff helping set up our exhibitions; stroke is something that, sadly, brings us all together.

With 128,000 people in Scotland living with the effects of their stroke, this isn’t perhaps that surprising. But despite this, stroke is still not given the priority it needs; in Parliament, in the health service and in medical research.

Across the week, we met with around a third of the 129 MSPs, including Cabinet Secretaries and Ministers, and had some really constructive conversations about the state of stroke treatment and care in Scotland.

It was encouraging to hear of a genuine interest in this area and willingness to work with us, with their relevant health board and cross-party colleagues to drive forward improvements.

Their commitment to this has been reflected on their social media accounts and in one case, a newspaper article. Often these events are viewed as a quick ‘photo-opp’ for a politician's social media but it was pleasing to have so many productive conversations after such a long time.

The event couldn’t have happened without the support of our sponsor, Gillian MacKay MSP and her team. Gillian is the Green MSP for Central Scotland and is the party’s health and social care spokesperson. Despite it being an incredibly busy week for Gillian (with the launch of her Member’s Bill into Buffer Zones), she still took the time out of her day to chat with us and encourage colleagues to come and meet us which was greatly appreciated.

We had a really enjoyable few days inside Holyrood and I'm now really keen that we harness the enthusiasm many MSPs have to make stroke a priority and improve the lives of the 10,000 Scots who have a stroke every year.