On Tuesday 1st September 2015, the Chief Scientist Office and the Stroke Association celebrated their partnership in building stroke research capacity in Scotland with the joint funding of two new research awards.

Held at Scottish Parliament, our celebratory event was delivered by a range of eminent speakers, and was attended by stroke survivors, carers, stroke researchers, clinicians, and Scottish Members of Parliament.

Mr Dennis Robertson, MSP and Convenor of the cross party group on heart disease and stroke, chaired and warmly introduced our speakers throughout the evening.

The keynote address was delivered by Mr Jamie Hepburn MSP, Minister for Sport, Health Improvement and Mental Health, Scottish Government.  He asserted that stroke is a condition where improvement is being made, with standardised mortality rates for stroke decreasing by over 41% between 2004 and 2013.  He shared how the Scottish Stroke Care Audit continues to show improvements in stroke care in Scotland, such as with the ‘stroke care bundle’ – a group of specific interventions that have been shown to significantly improve patient outcome if delivered together. Nationally this improved by 7% during 2014. 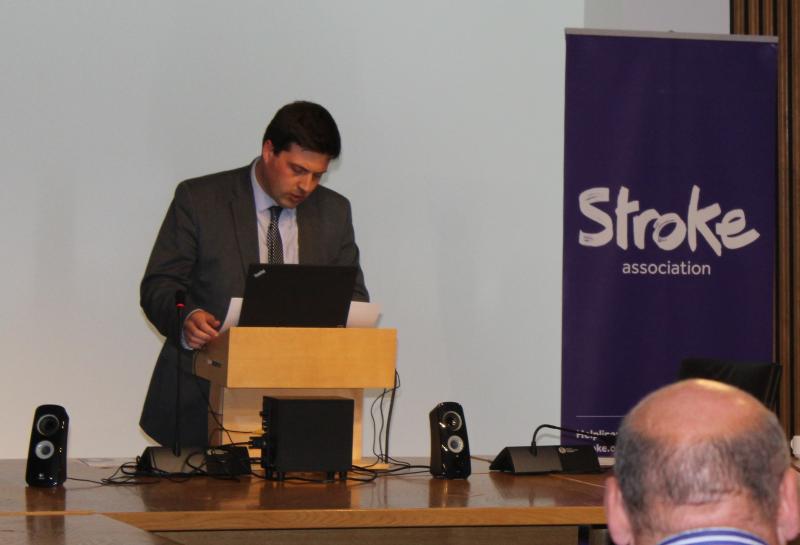 However, he said there is more to be done, with the Stroke Improvement Plan (published August 2014) setting out a comprehensive strategy for further reducing the number of deaths from stroke, providing best possible care in the acute setting, and helping people with long term recovery in their own communities.

Mr Hepburn also welcomed new treatments, including the use of mechanical clot retrieval, and said that the Scottish government remain committed to exploring the options for this treatment.  He cited the Annual Scottish Stroke Care Audit National Meeting on 25th August 2015 spending the entire afternoon session on this issue.

He stressed the Scottish Government's recognition of the crucial role of clinical trials in the development of new treatments for stroke, shown through its investment in the Scottish Stroke Research Network. The network had another productive year, with over 1200 patients recruited to a total of 41 studies.

Living with the psychological effects of stroke

Mrs Julie Jackson then spoke about the psychological effects she experienced after having a haemorrhagic stroke, including the challenges of having hidden symptoms, and adapting to a new way of life.  She shared how it had been an embarrassment when her husband had to prompt her, when she failed to recognise people she knew.  Wanting to be able to cook for her family again, she also had to adapt by using a slow cooker.  Looking back over her last two years, the NHS did a lot to help, but she had been given no explanation of what the cognitive and emotional problems would be after her stroke.  Life now is good.  It is slower, and it takes understanding and acceptance.

Dr Alain McNair, (Senior Research Manager, Chief Scientist Office) spoke of the continued success of the Scottish Stroke Research Network in the development of clinical trials in stroke research.  He shared some of the history of the Chief Scientist Office, including how it has funded the Cochrane Stroke Group since 1994, which has changed clinical practice, and also the DORIS database of research in stroke.  He also stressed the benefits of collaborative funding, in terms of making the same amount of money go further and helping with the targeting of research.  He shared how the Chief Scientist Office funds 30% of all stroke research applications made to the organisation (as compared to 20% of all other research applications), a testament to the quality and impact of the research received from the stroke research community. Dr McNair ended with what a pleasure it had been to work with his colleagues at the Stroke Association, and looked forward to collaborating again in the future.

Stroke Research In Scotland: Our Commitment And Future Opportunities

Dr Dale Webb, (Director Research & Information, Stroke Association) emphasised the fact that today we have the likes of stroke units, thrombolysis, and the emergence of mechanical clot retrieval as a tool to treat stroke, and that many could be forgiven to think that the job is done. However, he reminded us that outcomes for haemorrhagic stroke have not changed over 30 years.  We also know from work by the James Lind Alliance, that the hidden, psychological impact of stroke is still an area of unmet need in stroke research, meaning that there is still very much to be done. He also cited the 2008 'Medical Research: What's it worth?' report which showed that for every £100 spent on medical research in the UK, the benefits to the economy equate to an earning of £39 per year in perpetuity. A significant return. Sharing the Stroke Association commissioned report, 'Research Spend in the UK: comparing stroke, cancer, coronary heart disease and dementia', he ultimately stressed how stroke funding was still dwarfed in comparison to other conditions.

BACK TO RESEARCH NEWS AND EVENTS