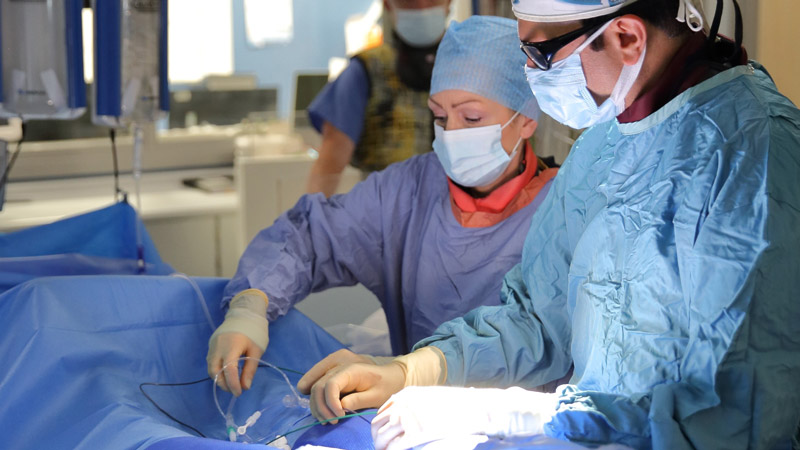 Thrombectomy saves brains, money and lives. It can change the course of recovery from stroke in an instant.
Thrombectomy is a game-changing treatment for stroke. It’s one of the most effective medical interventions ever developed.
For the 1 in 10 stroke patients who can have thrombectomy, this treatment can make a life-changing difference. It significantly reduces the chance of disabilities like paralysis, blindness or communication difficulties after stroke.
If it were available 24/7, across the whole of Scotland, then it could benefit around 800 stroke patients every year. But it is a very time-sensitive procedure that is most effective in the first six hours after someone’s stroke. For every minute a stroke is left untreated, 1.9 million brain cells die. That’s why this procedure is so vital.
In Scotland, we lag behind the rest of the UK. We only began the first, local pilot service in 2020. That’s despite new evidence for thrombectomy’s effectiveness being developed by Stroke Association-funded researchers at Glasgow University back in 2016.
We are supportive of the Scottish Government’s efforts to date with this, investing around £9 million so far into the service. It forms part of the Government’s wider commitment to stroke, which was initially announced in their 2019/20 Programme of Government and then again in 2020/21.
Why is this so important? Because it can change lives.

Alison from Dundee had her stroke at the age of 71, two years ago. One morning, before an operation, she suddenly developed left-sided weakness, vision difficulties and problems speaking.
Alison doesn’t remember much, but was told she’d been rushed into a room to get a brain scan, following which, she underwent a thrombectomy.
Alison said: “A nurse came up to me and told me that I’d had a stroke and had just received a procedure to remove a blood clot to help with my recovery. I was able to do everything – move, speak, see – I would hardly have known I’d had a stroke.”
“And now I feel great. I am back to doing all the things I did before my stroke: seeing friends and family, reading, watching telly, going on my exercise bike and for walks and I have started swimming now too.”
Currently, thrombectomy isn’t available to everyone who needs it in Scotland. In fact, the majority of people who need it will miss out completely. But we are hopeful that if progress continues at pace, and investment from the Scottish Government continues, then more people like Alison can live a life free from disability and life-long implications because of their stroke.
The government has promised a 24/7, national service by 2023. We will be keeping an eye on this to make sure it’s achieved. Read our full briefing.
If you want to join us in campaigning for access to these innovative treatments and improving care for stroke survivors then sign up to our Campaigns network.
News type:
National news