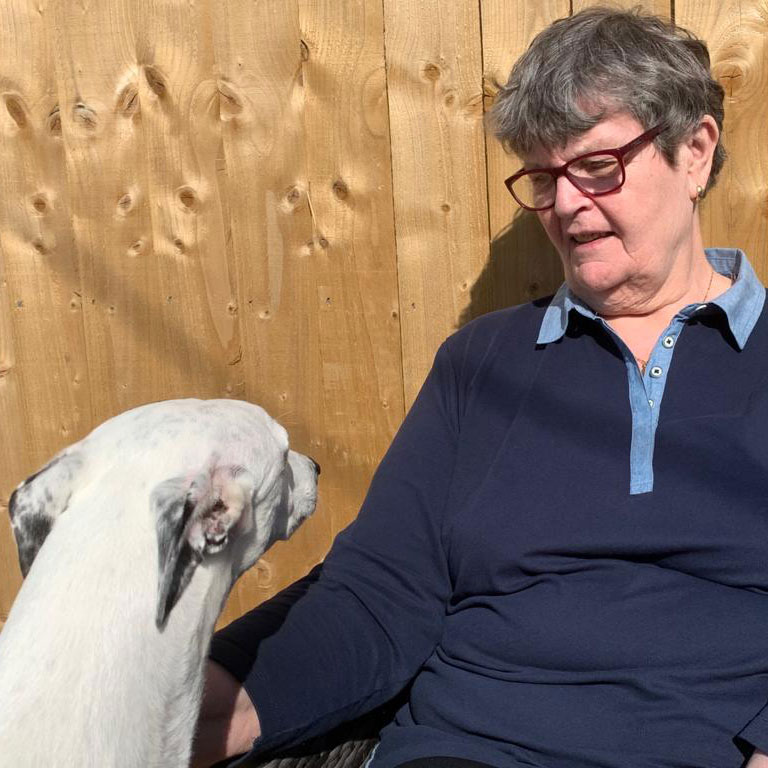 Hillary is 77 years old and lives on her own in Yeovil. She was married for 52 happy years before she lost her husband in 2014. She has three grown children, seven grandchildren and four great grandchildren.

Hillary travelled a lot with her husband and has fond memories of working as a paramedic in South Africa and living in Germany, close to the Black Forest.

In January 2021, while walking with a neighbour, she suddenly began to experience the symptoms of stroke.

Hillary said, “I was walking along and noticed I’d started veering to the left and was on the grass. I fell and hit my head on a lamppost. Two people had to help me get back up.”

Later that evening, Hillary’s son had called and noticed that she was slurring a little. He called again the next morning, then called 111 because Hillary was still slurring her words. She was taken straight to hospital.

Hillary was seen quickly by a consultant and had an MRI which confirmed a stroke. Hillary remembers, “I didn’t like going to hospital. It was so busy and noisy that you were unable to rest.”

Once home, Hillary received a call from Ruma, a Stroke Association Connector.

“Ruma was very nice and chatty,” Hillary told us. “I didn’t have any particular questions or concerns that she could help with but she talked me through the support that was available to me and I listened to what she had to say.

“I really appreciated all the information I was given to help me understand my stroke better and I felt much more informed about what happened to me.”

Hillary has reflected on what the service meant to her.

“Knowing that I can call the Stroke Association for support if I have any problems in the future is a good feeling. It’s an essential service. I’d recommend it to anyone.

“NHS nurses don’t have the time to do the things the Stroke Association does. Without them, I wouldn’t have had the information I needed and I am grateful for the support I had.”

Find out more about how you can refer your patients to Stroke Association Connect. You can also download and print Hillary’s case study.