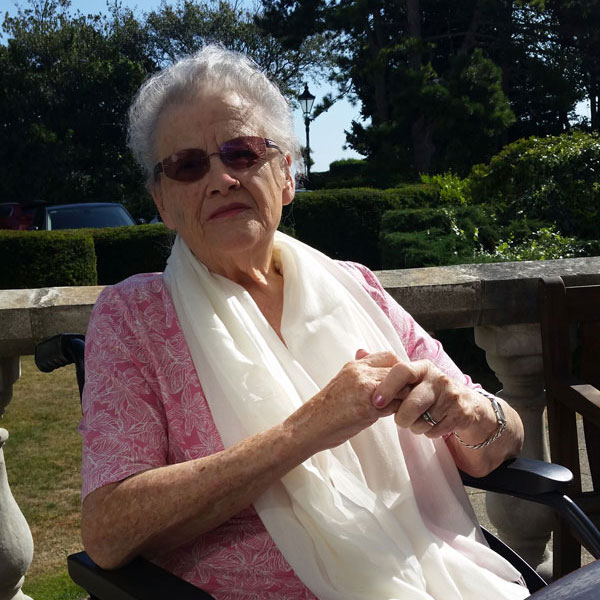 Shirley is 88 years old, widowed and lives in Eastbourne. She has two grown-up sons, as well as grandchildren and great-grandchildren whom she adores.

Shirley's had five strokes. She said, “I was sat having my hair cut when I had my first one. Luckily, my hairdresser recognised I was having a stroke.”

Shirley remembers that she couldn’t talk properly when having her third stroke.

“As someone with a theatre background, I’ve always spoken quite eloquently, I sounded most bizarre. My words came out in slow motion.”

In April 2021, Shirley had two strokes which have seriously impacted her vision, causing hallucinations.

Shirley told us, “I often see a ferris wheel going around in my left eye and a little girl near my left shoulder. I’ve bounced back well before, but this has knocked me for six.”

Shortly after leaving hospital, Shirley was contacted by Ruma, a Stroke Association Connector.

Shirley recalls, “Ruma called out of the blue; I wasn’t expecting a call from the Stroke Association. I am so grateful that she did. No one had ever spoken to me about my strokes before.

"Ruma sent me lots of really helpful literature in the post which has given me an understanding of stroke for the first time.”

Shirley was grateful for the support Ruma provided during and after the call.

“She was lovely. Really easy to talk to. I no longer feel a sense of loss. The Stroke Association have given me hope again.”

Shirley reflected, “People who have had a stroke can be lost souls. Ruma made me feel like I still mattered. I thought this was the end, but it wasn’t. It’s the beginning to my recovery.”

Find out more about how you can refer your patients to Stroke Association Connect. You can also download and print Shirley’s case study.