Working as one team

In a year in which healthcare staff across the UK have gone the extra mile, the team at the Cardiff and Vale University Health Board Stroke Service are doing even more to support those affected by stroke.

The busy service supports over 650 stroke survivors a year, with NHS and Stroke Association staff working together to help people rebuild their lives after stroke.

In May the stroke team launched “1Stroke1Mile1Pound” – a challenge to walk, run, or cycle 7,400 miles in aid of the Stroke Association. That’s one mile for every stroke that occurs in Wales every year.

“I wanted to highlight the incredible work the Stroke Association do with our patients and show them how much we appreciate their support by giving something back,” says NHS stroke physiotherapist James Hinder, who organised the challenge. “This shows that when we come together as a collective, achieving small goal after small goal, we can do something incredible.” 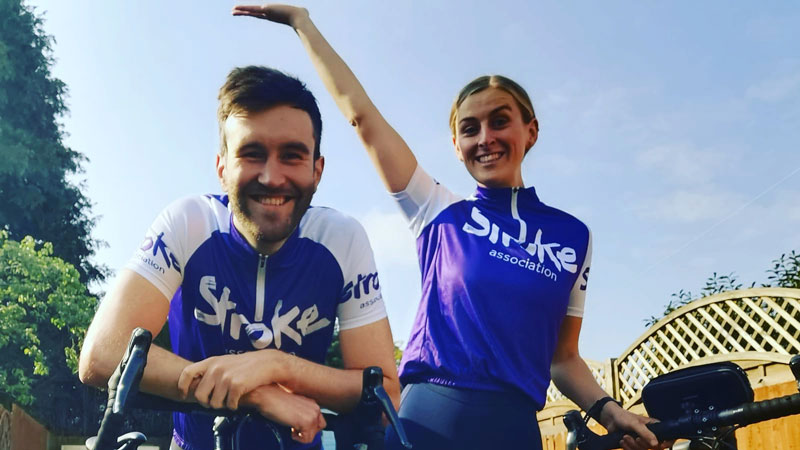 Over 50 people including doctors, therapists, housekeepers, nurses, stroke survivors and their friends and families signed up, including Bernard Perry, 60, who has been supported by the service since 2017.

“I was at work fitting a kitchen when I felt something wasn’t right,” he says. “I started to lose feeling in my left leg and this numbness travelled up my side. I remembered the FAST campaign and thought I might be having a stroke so I asked to be taken to the hospital. They told me I’d had a transient ischaemic attack (TIA or mini-stroke). A few days later my symptoms returned – this time it was a stroke.”

Bernard spent seven weeks on the stroke unit at University Hospital Llandough and still has mobility problems on his left side. He’s a regular at the hospital’s Wednesday walking group and is using fitness app Strava to record his miles for the 1Stroke1Mile1Pound challenge.

“I also go to a walking football group so that’s added to my total miles,” he says. “I haven’t set myself a goal, I’m just doing as much as I can.”

The team have smashed their original target of £1 per mile, raising an amazing £26,700 which will help us continue to rebuild lives after stroke.

Find out how to get involved in one of our fundraising events or organise your own.