Bryony is a qualified masseur. She began volunteering for the Stroke Association in 2016 after seeing a tweet advertising a volunteer masseur role for the York Marathon. She could never have predicted that she would one day be using our services following her own stroke.

Byrony had a stroke on Christmas Eve 2017, aged 24. She couldn't talk and she was experiencing seizures, drifting in and out of consciousness. Luckily her housemate was there and phoned for an ambulance.

The medical teams took some time to identify what was wrong with Bryony, but after being passed from ward to ward, Bryony was placed in a stroke unit. The stroke had left Bryony without the ability to walk or talk. She was only able to say 'yes' and 'no'. Bryony refused to accept that this was her fate and she began physiotherapy, occupational therapy, and speech therapy.

[I'd repeat to myself] I WILL walk again, I WILL talk again.

Bryony showed incredible courage and determination throughout her rehabilitation. She continued to get support from people at the Stroke Association, who she knew from her volunteer work, and she started working with the Stroke Association Medway team. She moved back to her parents’ home in Kent where she was encouraged to socialise with people of similar age who could empathise with her.

Since her stroke, Bryony has benefited from the support offered by the Stroke Association. “Katy from Stroke Association York has helped me get a life after stroke grant to help support me, and also a bus pass, which helps me when I'm exhausted.”

While recovering and rebuilding her life after her stroke, she set herself a goal to massage again. In October 2018, she did just that. Bryony said, “It was exhausting and by no means easy. But I did it. I also managed to volunteer at the Resolution Run in York again. No one believed that I had had a stroke.”

Bryony's attitude towards volunteering is inspiring. She has many reasons for volunteering but says that she loves "supporting those when they've completed a run in memory of someone. Especially when I say I've had a stroke, they melt and you can see their hearts break a little, you just engulf each other in a hug. However hot, sweaty, wet or sore they are." 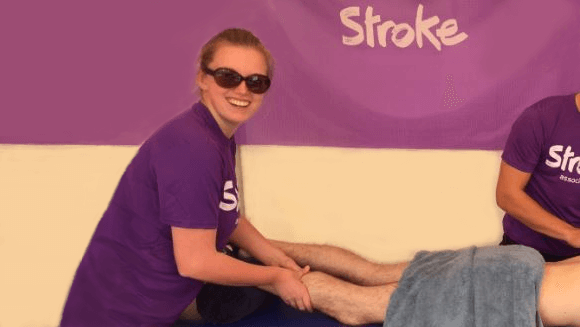 Back to stroke stories