Peter Hurrell, 26, is taking on the Virgin Money London Marathon for the Stroke Association on Sunday 24 April 2022 after his dad suffered 4 strokes in just one month.

Peter and his dad, Gerry, were on a weekend break in Bath with the rest of the family at the time of Gerry’s stroke. Gerry was left unable to speak or move his lefthand side. He was rushed to hospital where doctors used blood thinners to reduce the clots in his brain.

Gerry initially recovered quickly following the treatment. But while he was still in hospital, Gerry tragically suffered another ischemic stroke (caused by a clot) and two hemorrhagic strokes (caused by bleeds). As a result, Gerry lost the use of all his limbs, the ability to eat and drink, and couldn’t communicate. 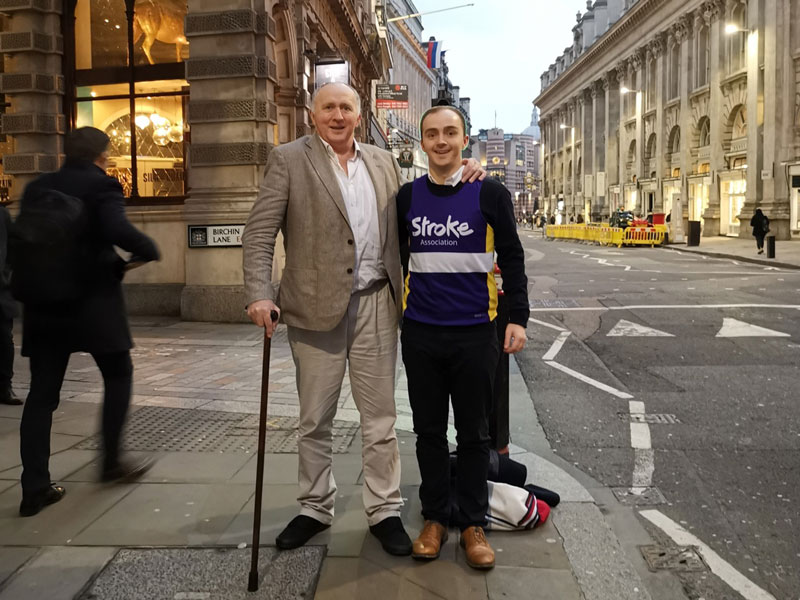 He was in Bath Hospital for several weeks before being transferred to a hospital nearer his home in Hertfordshire. He then spent six weeks at a specialist hospital for intensive rehabilitation before going home. Thankfully, he had no more strokes during this time.

Peter said: “I think the worst thing about Dad’s strokes, and the condition in general for us, is that you have no time to adjust. Things literally changed overnight and we were constantly worried about what would happen next.”

“Throughout everything, my Dad has had an inspiring determination to improve his condition. This, along with the incredible support of doctors, nurses and physios, to name a few, led to him being able to walk, talk and eat properly again.”

“I am honored to be able to run the London marathon in aid of the Stroke Association. They’ve been a great support. Rehabilitation and physio have been so vital for my Dad. As a family, we resorted to paying privately for physio, as we weren’t getting enough sessions when Dad left hospital but we know other families might not be able to afford this. It really shouldn’t be a luxury when we have seen firsthand how effective it is for stroke survivors.”

"Unfortunately, because of the depressive nature of strokes, I think people can give up too easily, too quickly. I'm not blaming them, they just don't have the support network around them either through family or through physiotherapists - you really need that!"

Peter’s dad, Gerry, added in 2019: “Even now, two and half years later, I still feel improvements are being made. I don't think for a second I've finished improving.”

This will be the second marathon Peter is running in aid of the Stroke Association after completing the Virtual London Marathon in 2020.

Peter said: “I thought training for the marathon would be tough but that was an understatement! I definitely have a new-found respect for runners.”

The 2022 London Marathon will be particularly significant for Peter. Unfortunately, despite the significant improvements made by Gerry, 4 years after his first stoke Gerry suffered another stroke and passed away shortly after at the age of 61.

To find out more about Peter’s story and to donate, please visit Peter's Just Giving page.