Stroke survivor, Phil, stars in We Are Undefeatable campaign

Stroke survivor, Phil from Stockport, is to star in a new TV advert as part of the We Are Undefeatable campaign, encouraging people with long-term conditions such as stroke to get active.

Phil is a navy veteran and had been active his whole life until his stroke in 2016, which left him paralysed down the left side of his body. But with the help of physiotherapy exercises, Phil had improved his mobility and was making great progress. With the encouragement and support of his children and grandchildren, Phil has found ways to adapt after his stroke, like gaffer taping his foot to an exercise bike.

To his disbelief, Phil was then diagnosed with a spinal tumour in 2020, giving him another hurdle to overcome.

Phil found that light exercise was a way for him to feel ‘normal’ again after his stroke. He told himself that if he could get active and recover once, he could do it again.

He was left unable to walk after surgery on his tumour, but, starting with home exercises, he eventually managed to get back in the gym and is improving his mobility yet again.

On the days when he doesn’t feel quite up to the gym, Phil does small exercises like marching in place, which he learnt from his time in the Navy, and religiously exercises using a can of mushrooms as a weight. 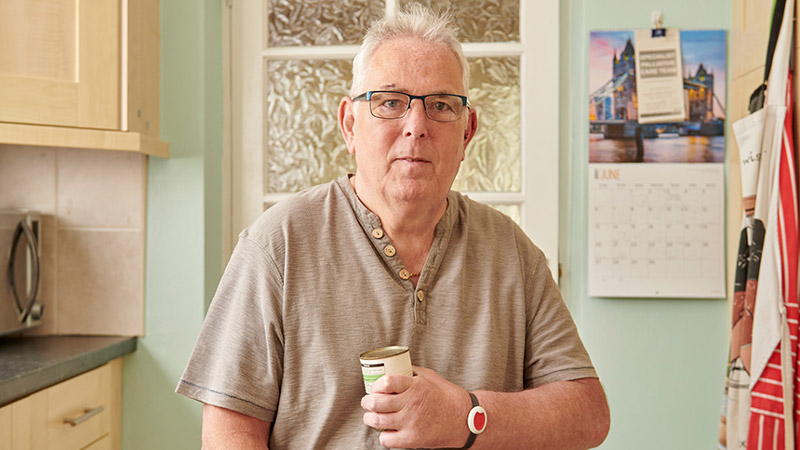 We’re proud to be part of We Are Undefeatable, along with 15 other leading health and social care charities. Together, we’re helping many people living with a long-term health condition to know that a little goes a long way, especially when it comes to being active and getting moving.

Find out more about Phil and how he stays active on the We Are Undefeatable website or take a look at our Getting moving after a stroke pages for ideas about how to stay active after stroke.