Garry Rees, from Tredegar, Wales spent Christmas in hospital, after he had a stroke caused by a bleed in his brain in December 2019.

“Before I had a stroke, I was running, swimming and cycling every week,” says the 55-year-old computer engineer. “My stroke left me with right-sided weakness. I couldn’t physically do anything, which really got me down.

“My family were amazing. They helped me to learn the things I needed to get back to some semblance of normality. I went back to my childhood - Lego, Meccano and jigsaw puzzles. All helped me with my dexterity, and each thing I built gave me a great sense of satisfaction and the hope I needed at the beginning of my recovery.”

However, after three months of gradual progress, the coronavirus pandemic brought Garry’s rehabilitation to an abrupt halt.

“When we went into lockdown, I spiralled into a depression. The stroke gave me heightened emotions. I’d get very angry or burst into tears and sob like a child. I had no control over it. It was so alien to me, and I didn’t know what was causing it or how to stop it.

“I was having a really bad day when Lauren Heath from the Stroke Association emailed me to tell me they were running virtual stroke support groups and encouraged me to attend.”

With Lauren’s support, Garry joined the Blackwood Stroke Group. Although Stroke Association clubs and groups have paused their face-to-face meetings, many are staying in touch online using social media or video call services, such as Zoom.

“There are so many great characters in the group, which has a lovely family feel to it,” says Garry. “They know how I feel as they have been there too. They show me there is hope after having a stroke.

“Joining the group has also given me a purpose as I’ve been helping members who struggle to attend the Zoom meetings because of computer issues. I collect their computers, at a social distance, and fix them. Helping others to get online and be part of the group again in these difficult times is great. It’s good for me too and it helps with my recovery.” 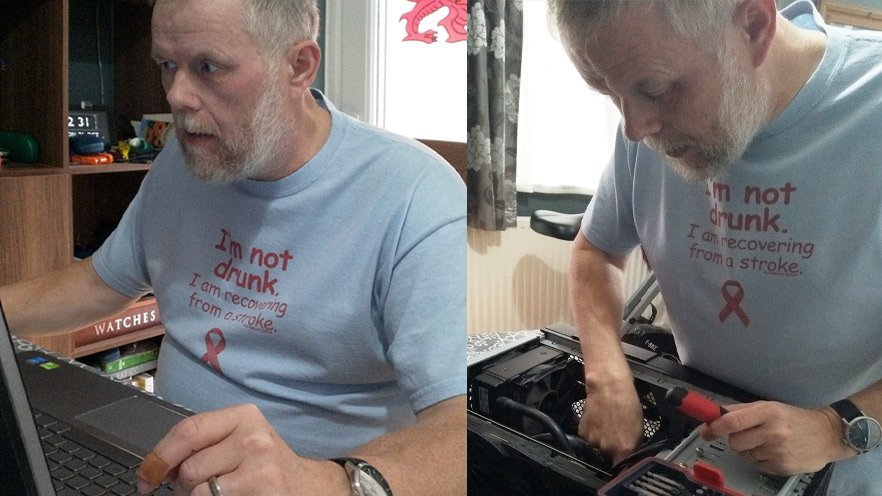 Many stroke clubs and groups are offering remote support. You can find out what’s going on in your area by calling our Stroke Helpline on 0303 3033 100 or by completing this webform and we will get back in touch.

This article is featured in the winter 2020 edition of our magazine, Stroke News. Subscribe to our future editions available in print, on audio CD, or via email.