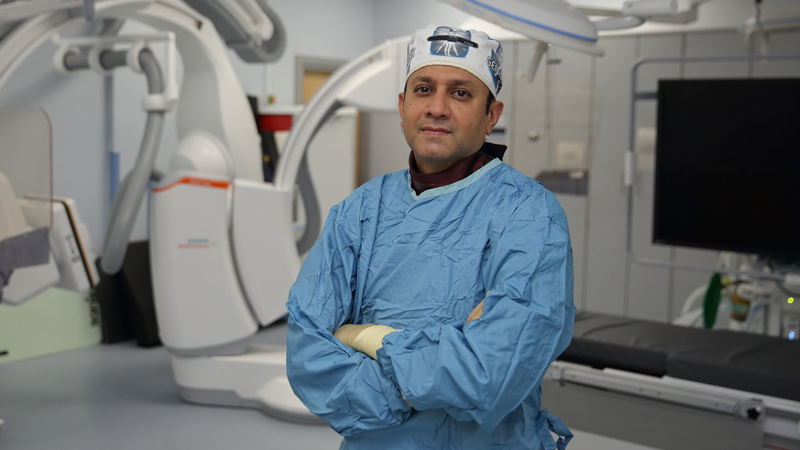 Thrombectomy is a game-changing treatment for stroke. For the 1 in 10 stroke patients who are suitable, it significantly reduces their chance of disabilities like paralysis, blindness and aphasia - and in some cases even saves lives.

We’re calling on the government to provide extra funding to make this treatment available to everyone who needs it.

Dr Sanjeev Nayak set up the first 24/7 mechanical thrombectomy service in the UK. He tells us about his work and why he’s supporting our campaign.

“I’m an Interventional Neuroradiologist. I treat blood vessel conditions in the brain and spine, including strokes, using minimally invasive methods rather than traditional surgery.

I first learned about thrombectomy when I was training at a stroke treatment centre in Austria. They were pioneering this new procedure they’d discovered by accident. They’d treated a patient using a small wire cage called a stent. A clot developed and they pulled the stent out - and the clot came out too! I saw them use the technique with stroke patients with great results.

When I became a consultant at the Royal Stoke Hospital, our data showed people with strokes caused by large clots in their brains often died or were permanently disabled. I knew something radical had to be done. So in 2009, we introduced the UK’s first thrombectomy service for our stroke patients.

Beforehand, strokes caused by large blockages were often treated with clot busting drugs (thrombolysis). But these rarely work on big clots. Put it this way, if your kitchen sink is blocked and you put some drain powder in it, it might open up. But if there’s a large blocked drain on your street, drain powder won’t work. You need someone to go in and take out the blockage.

Thrombectomy is like that. We insert a stent into an artery in the groin and thread it up into the brain to pull out the clot. It can be performed up to 24 hours after a stroke, but is most effective in the first six hours.

The results are life-changing. Someone who might have had severe disabilities can now go home within days to live independently. It’s one of the most effective treatments ever discovered.

As a doctor, the feeling that you’re making such a difference to someone's life is better than anything. But currently it’s a postcode lottery. If you’re not in the right area, or you have a stroke after 5pm - or at the weekend - it’s bad luck for you.

We need to make thrombectomy available 24/7 across the UK. By campaigning with us, you can put pressure on the government to make funding available to deliver thrombectomy. We need to act now so more people can benefit.”

Please sign our open letter to the UK Government urging them to act on the recommendations in our Saving Brains report.

This is an extended version of an article featured in the summer 2022 edition of our magazine, Stroke News. Subscribe to our future editions available in print, on audio CD, or via email.