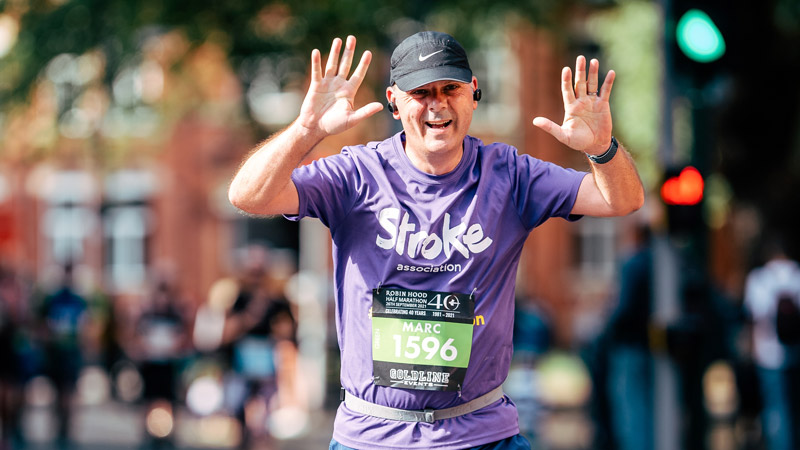 Marc Hodes, 53 from Nottingham, was busy with family life, a successful career as an IT director and coaching at his local football club. On 30 September 2018, he ran the Robin Hood Mini Marathon with his children Chloé and Elliott. But something didn’t feel right.

“I’d been having terrible headaches for a week before the race,” he remembers. “I managed to get around the 2.5k course but I was struggling to keep up with the kids. After the race, I kept trying to say things but the words wouldn’t come out. My wife Sabrina took me to the hospital and a scan revealed that I’d had a stroke. It was a big shock.”

After the stroke, Marc had difficulty with his balance, as well as severe headaches and fatigue. “I couldn’t walk straight,” he says. “And I was scared that I was going to have another stroke.”

Sabrina planned to run the Robin Hood Half Marathon in September 2019 to raise funds for the Stroke Association and encouraged Marc to get out with her for some gentle jogging.

“I found it was easier to keep my balance running than walking,” he says. “Sabrina pushed me along but also made sure I didn’t try to do too much.”

When Sabrina had to drop out of the race because of a knee injury, Marc decided he was ready to take on the challenge.

“On the day of the race, I felt so emotional. One year after my stroke, my wife and children were able to watch me run a half marathon for the Stroke Association. It was amazing.”

Marc raised over £1,000 for the Stroke Association that day and went on to raise a further £1,500 in the 2021 race. He’s already signed up for this year’s event, and running continues to be an important part of his recovery.

“I don’t always enjoy getting out for a run, especially when it’s cold and wet. But once I’m running I feel great. It makes me feel really good about myself. I’m fitter now than I was before my stroke. I hope I can show that after a stroke it’s still possible to get up – you have to keep looking ahead.”

Find a fundraising challenge to suit you. And learn more about getting active after a stroke.

This article is featured in the spring 2022 edition of our magazine, Stroke News. Subscribe to our future editions available in print, on audio CD, or via email.